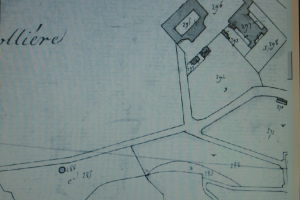 Extract from the Napoleonic land register

The inventoried book, “Fours à chaux du Rhône”, published in 2003, does not mention the existence of a lime kiln at La Barollière. However, this oven clearly appeared on the Napoleonic land register.

Taking into account the transformations carried out at the above mentioned place, at least twice :

One could wonder about the exact location of the structure and the state of any remaining elements underground.

Here is the beginning of the 2006 project 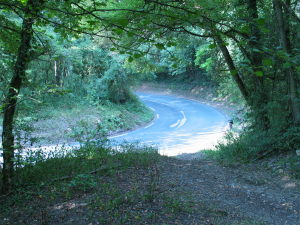 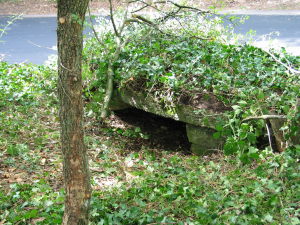 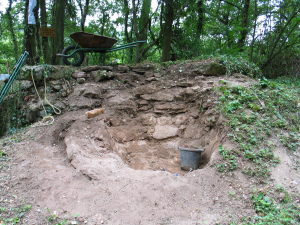 In the area of this search, two cut stones emerge from the road embankment, next to a small depression. Are these clues related to our research ?

To verify this, with the owner's authorisation, the research begins with clearing the vegetation and cutting trees from June. This brings to light, at ground level under ivy, 2 beautiful roofing stones in an arc shape supposed to belong to the upper part of the lime kiln.

So would the oven have been there ?!
Elements of the kiln likely remain under the roadside.

A series of digs has made it possible to clear the interior as far as the foundations and confirms that 3 structures are in very different states of conservation.

Following an awareness of the interest of the uncovered remains, an agreement established with the owner allows us to undertake safeguarding actions under good terms. The granted plot is fenced for 350 m along the road and the old village road.

The entire 1200 m², abandoned for decades, is being reclaimed by the removal of waste and overgrown vegetation. In July, the volunteers of an international youth group use a lime mortar to consolidate the internal facing of the fireplace.

The team accidentally discover its access by staircase during the extraction of a tree stump. 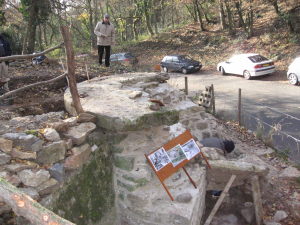 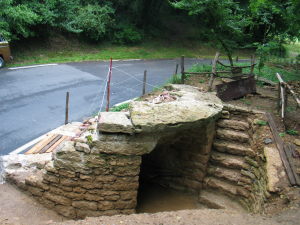 The year is mainly devoted to consolidating the external structure with nearly 200 buckets of lime mortar.
Our ground workers clear by hand the outlying area of the oven and develop the access path (70 m³ with shovels, pickaxes, buckets and wheelbarrows !)
The site is open to the public for the first time during the “Là-haut le Mont Verdun”* For this 11th edition the chosen theme was local agricultural, artisanal or industrial production locations. The lime kiln was one of the stop-points on a hiking trail along the Mont Verdun valley. event organised as part of the “Journées du patrimoine de Pays”. 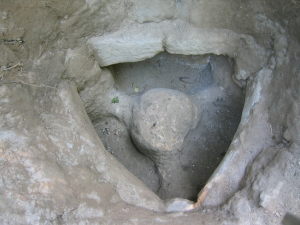 The fireplace seen from above 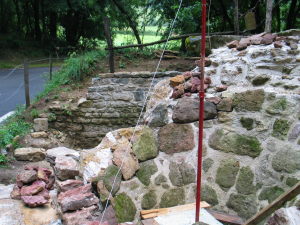 The upper part of the fireplace 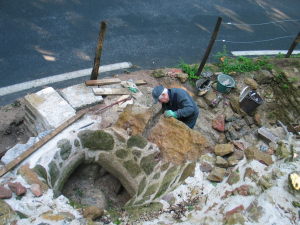 The opening of the lime kiln

The prize for the Patrimoine Rhônalpin was not obtained, but the submission of a dossier makes it possible to specify the objectives and the plan of actions : 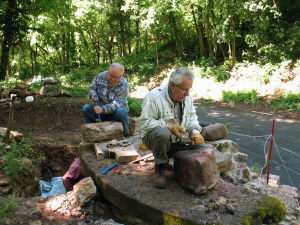 Restoration begins with the renovation of the remaining upper surfaces.

Crowning stones are selected and put into shape under the guidance of the ASSIL stonemasonsAssociation des Sites de Loyasse (in Lyon-Vaise)..
The final cement laying is carried out with the participation of an international youth group. The latter consolidate the masonry by repointing all the external stones.

The year-end work rebuilds the loading ramp ( landscaping and stonework). 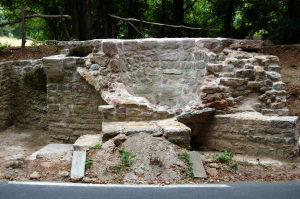 Limonest Patrimoine received the assistance of 5 students, BTS landscape design on a work and study basis, from the “Maison Familiale Rurale” at Chessy-les-Mines.

They carry out a public traffic flow : plotted with pedagogical progression, security and some associated educational elements. 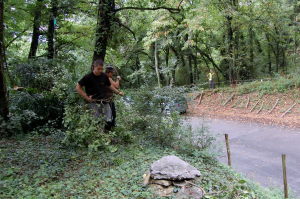 Clearance of the path 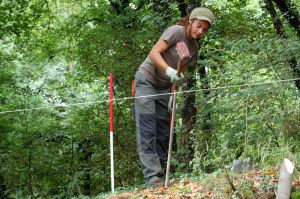 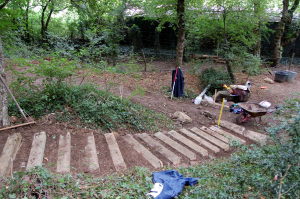 The association has, for its part, rebuilt the paving of the furnace loading ramp. 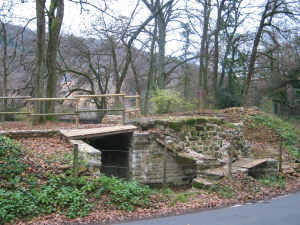 During the European Heritage Days this site hosted a stopover for horse-drawn carriages going up to Mont Verdun from the exhibition at the Post relay.

Small security fencing and sign posts were the actions to prepare for this event.

The association's team assembled one morning to close the season with on the programme :

Construction of a small culvert spanning the damaged opening during the widening of the road to facilitate public traffic. 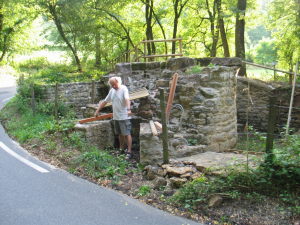 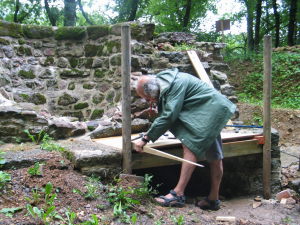 Clear the retaining wall that currently continues under a landfill. Action carried out in partnership with OCRA-Lyon. 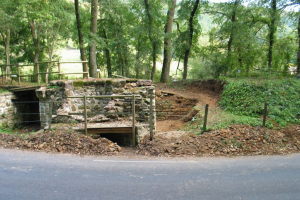 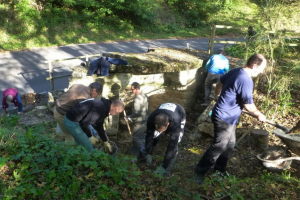 The previous action leads us to modify the public path.

The association of “Lavoirs et petit patrimoine” carries out for us the important groundwork necessary. 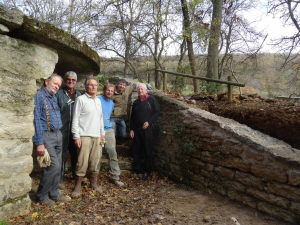 This site, now available for visits by appointment, requires only a small amount of maintenance and an update of the educational information. 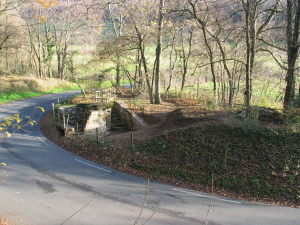