(Military memories of the Monts d'Or)

The 4 Military memories of the Monts d'Or (3MO) projects aims are to develop the restoration of the “batterie des Carrières” by extending it with 3 small circuits dealing with local fortifications. This theme leads the walker to the preserved site of the Monts d'Or, accompanied by a reading of the terrain and some landmarks of local history. 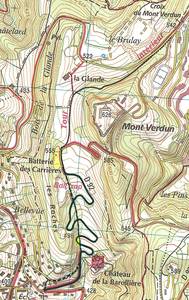 The association has a real Guidance Council, benefiting from the specific skills of its members.

An agreement between the Municipality of Limonest and the association has made it possible to ensure, since 2003, a local anchoring to the “Batterie des Carrières”. The attractiveness of this place can be measured by a few observations :

The effective implementation of these 4 projects can only be progressive depending on the opportunities and the involvement of the partners.

The site of the “Batterie des Carrières” has a unique combination of advantages that makes it exceptional :

The ravelinHalf-moon : Fortification work almost triangular or semi-circular. of the entrance to the “Batterie des Carrières” is characterised by its function as the central pivot of the 4 projects. A real point of convergence and balance between the 3 circuits and the 2 discovery paths planned on site. It is open, therefore always accessible to the public, with a possibility of parking for several vehicles.

The extramural circuit has a real geological, mineralogical and botanical interest. Due to the risks of the natural terrain, it only remains accessible if accompanied by a member of the association.

The intramural circuit projects the visitor into functional questions about this paradoxical place, which is by nature closed, but at the same time open to the outside world through distant view windows. A number of associated decorations are combined with elements of historical visibility.

The fort’s circuit is located on the military grounds and along the departmental roads D92 and D92E respectively managed by the MDRs of Limonest and Neuville-sur-Saône.

The Air Base 942, with this fort, is one of the last fortifications in the region that has never ceased to serve the defence. The particularities of this fort “Séré de Riviére”Raymond Adolphe Séré de Rivières, French military engineer and general (1815-1895). He gave his name to a line of fortifications built after the War of 1870., visible from the public road, testify to the exceptional characteristics of a transitional structure.

The project's signage seeks to explain the origin and operation of this fort, as well as its particular link with the “Batterie des Carrières” located 500 metres away.

This circuit, in a game-like format, reminds us of the importance of the landmarks used before the use of GPS. It is intended for children and takes the path from the “Batterie des Carrières” (municipality of Limonest) to the cross at the summit of mont Verdun (municipality of Poleymieux au mont d’or).

4 - The route of the engineer regiment

This itinerary is limited to the portion of the D92 departmental road between the exit of the village of Limonest and the “Batterie des Carrières”. Due to its attractiveness, this road benefits, during the summer months, from closures to motorised traffic. The old communal and pedestrian road cuts through the bends of this road. The future signage of the route of the engineer regiment is intended to be visible on these two routes.

The main theme developed covers the consequences on local life of the establishment of fortifications (temporary requisition of land, expropriation, drilling of strategic roads, establishment of defensive easement zones, presence of thousands of workers).